Is JSON a strict subset of Mark?

Yes. Mark is carefully designed to have JSON as a strict subset. Any valid JSON source should be accepted as valid Mark input, except one circumstance you need to be aware of.

Under Mark, property keys for both Mark and JSON objects must be unique under the same object. This is strictly enforced under Mark. But is left open in the initial JSON spec, and there are many implementations that accept duplicate keys in JSON. But the official JSON spec strongly advise against such practice.

And there even are programmers utilize that loophole to put comment in JSON. If you follow such bad practice, then your JSON needs to be cleaned up first before migrating to Mark.

Is Mark a subset of JavaScript?

No. Mark has introduced many syntax extensions to JSON, and its syntax is no longer valid in JavaScript.

But Mark has a clean data model that is a subset of JS data model. 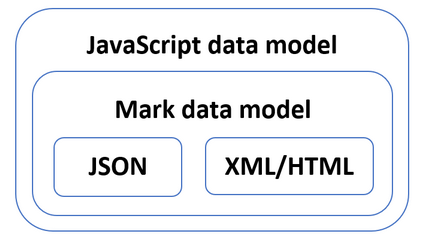 Security has been taken seriously when designing and implementing Mark. It is implemented to be as secure as possible.

Standard JSON.stringify() implementation calls toJSON() method if it is defined on the object, before stringifying the value. Such invocation might not be secure, and is not supported under Mark.

JSON.parse() and JSON.stringify() also accept an optional parameter of a reviver and a replacer function. There are neither structured nor secure way to serialize and deserialize custom data types, thus no longer supported under Mark.

Can Mark be used in languages other than JS?

Yes. Mark is designed to be a generalized data format, like JSON and XML. It is no meant just for JavaScript.

However, due to limited resource, the Mark handling library is currently only implemented in JS. But as Mark has a very simple syntax and data model, it should not be hard to port it to other languages.

No. By itself, Mark is just a markup notation, thus not Turing complete.

However, if some interpretation is applied to the content embodied in the Mark document, then it can be a very powerful Turing complete scripting language. Mark Template is such an example. Ant and XSLT are similar examples in XML.

What is Mark’s road map?

Like JSON, Mark’s syntax and data model is designed to be stable. I don’t foresee any changes in the near future. Thus the mark.js library shall remain stable as well.

Almost. The Mark syntax and data model has stabilized, and I don’t foresee any changes soon.

The core Mark APIs have been thoroughly tested, and shall remain stable as well.

mark.convert.js which provides conversion between XML/HTML and Mark, and mark.selector.js which provides query function on Mark data using CSS selector, are fully functional, and carefully tested as well. However, due to the complex nature of XML/HTML/CSS, there might be corner cases not properly supported. And they’ll be fixed through on-going maintenance.

So you can start using mark.js in production environment already. For any critical data or usage, always test carefully and thoroughly before you cut over.

mark is maintained by henry-luo.

This page was generated by GitHub Pages.